Interview Eleftheria Deko for impactalk be a leader 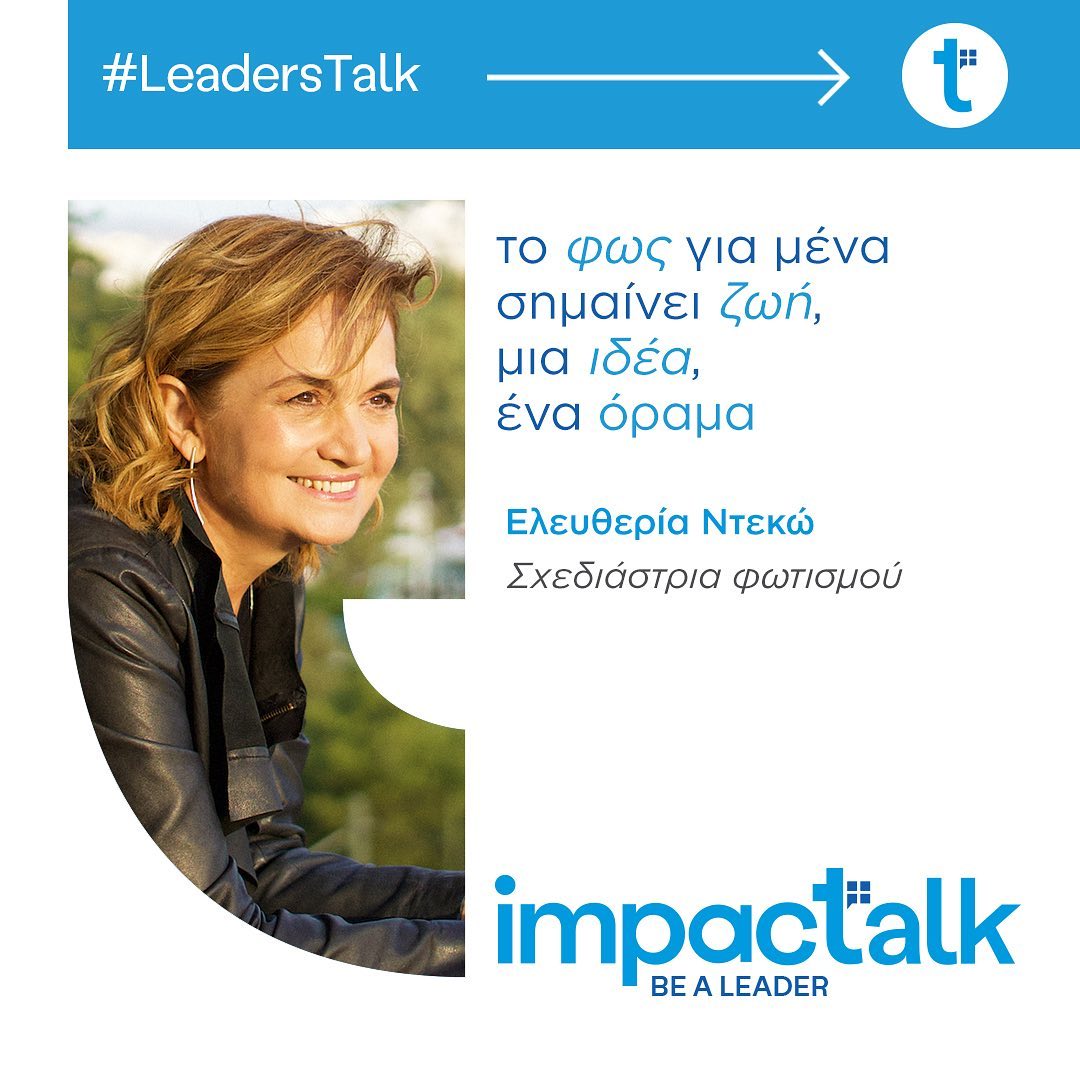 “Light for me means life, an idea, a vision”

“Works of art speak to us”. Eleftheria Deko illuminated the Acropolis and changed the greatest monument in the world for all of us. She lit up the opening and closing ceremonies of the Olympic Games to be on the red carpet at the Emmy Awards and established a chair at the University with the material of her course… Eleftheria, a citizen of our world, travels through her own light, to her own favourite destinations. Magical images through honest words.

The Artist of Light By Mia Kollia

Eleftheria Deko, a woman who tames and highlights the light, a leading figure of our country and internationally in the field of lighting, sees everything in her own unique way. Eleftheria transforms performances in theatre, music and dance and dresses up buildings and monuments.

The lighting of the Acropolis was definitely one of her greatest achievements, as well as her participation in the Athens Olympic Games in 2004, as Director and Lighting Designer at the opening and closing ceremonies.

Eleftheria is a fighter, stubborn, sensitive and meticulous. She is an impeccable professional who constantly takes care to feed back her passion, something that she considers necessary for anyone who wants to remain a leader in his field. Eleftheria Deko is a charismatic Greek woman who praises the greatest natural advantage of our country, light, in the best way.

For her work in illuminating the Acropolis in April 2021, she received three important awards at the Dark Awards 2020, among which, the Great Prize “Ultimate Darc Award”, as the “best of the best” in lighting design for 2020.

Earlier, in September 2005, at the 57th ceremony of “The Academy of Television Arts and Sciences”, she won the Emmy Award in the Outstanding Lighting Direction category for the Opening Ceremony of Athens Olympic Games in 2004. Her collaboration with Dimitris Papaioannou, who also received this honorary distinction, was definitely a decisive one and a very important period of her career.

Light in the Acropolis, light in her life

Eleftheria claims that the monuments speak to the artist who is called to reconcile with them for some reason. Thus, she has learned to listen to them carefully and perform in the best way what they “ask” her to do.

The new lighting of the Acropolis monument, a lifework, will forever be her highlight. She spent hundreds of hours there, wandering the hill and every corner of it, looking for what these masterpieces that have stood there for centuries wanted. Eleftheria managed to highlight in an exceptional way the most important monument in the world, in Athens that can now be seen from many different places, thus, magically praising the greatest heritage of Greece.

The lottery that changed her life

As a little girl, she was looking forward to playing in the streets and alleys, something that came around 8 years old when they moved from Mets where she grew up and went to Argyroupoli. The love for music and dance derived from her parents, for whom she overflows with tenderness. She always remembers them being at home, singing, dancing and making gifts with their own hands. Since then, she has seen everything through the cylindrical toilet paper while she also captures everything with the gift camera.

Eleftheria Deko left to study dance in America because of a lucky moment, an incredible coincidence, when her parents won the lottery and as a result they managed to send her to make her dream come true. For Eleftheria, New York was not just the studies but essentially a huge new world of experiences – from street music to meeting different people and the opportunities that emerged, she lived there for 5 years full of everything. In New York, Eleftheria Deko also worked as a lighting designer and taught Lighting Design in New York University (NYU).

In 1992 she returned to her birthplace, Greece, at a time when her profession was not even known as a title, let alone a woman doing it. But it wasn’t long until she made good impressions and took her place in the theatre, both in commercial and quality – if these divisions have ever existed.

Theatre, music and dance, opera and art installations: she dealt with everything with the same zeal and dedication and of course received excellent reviews, distinctions and awards, such as the title “Female Artist of the Year 2009” for her contribution to theatre and the arts in general.

She has been repeatedly invited to design the lighting of performances at international festivals. She established a chair in the University with her own course and is Assistant Professor at the School of Fine Arts of the Aristotle University of Thessaloniki, where she teaches “Theatrical Lighting” since 2005. In 2000, Eleftheria Deko created a department exclusively for architectural lighting. Since then the company has collaborated on a number of architectural projects related to commercial, public and private spaces.